I find it hard to cope with one Zoom or Teams meeting at a time, but in this new world, I often find I am supposed to be at two at once. I suppose I could try to play one meeting in one ear, and one in the other, but that sounds like pretty fruitless multi-tasking.

About 7 years ago, I came up with an idea called “IVNote”, an extension of the Intelligent Voice product set that could take call recordings from our office network, transcribe them, mine out interesting topics, and email the resulting “SmartTranscript” back to me. It worked really well, and we expanded it to the rest of the team. Because there was a transcript, you could even use your email client to search for keywords: Amazing.

It never made it out of our own office, partly because a lot of companies didn’t want to record their phone calls when we did our market research.

Fast forward to 2020, and suddenly we’re all off the phone and on to Zoom and Teams calls. And a whole bunch of these ended up being recorded, sometimes for later replay, but for a lot of people because their regulator demanded it.

IVNote got dusted off, and became “Myna” (https://meetmyna.com), expanded to meet the demands of the new world, so you could automatically record your own meetings using a desktop recorder (great if you weren’t the host), or if you were the host, we could pick up your recorded meetings from the cloud or your desktop, and email you a “SmartTranscript” after the call ended.

Great for personal knowledge management, but if you were dealing with a team, you were not really sharing the goodness.

So step in Slack, and one curious developer named Colin.

People think of Slack as a messaging app, but it is so much more than that. It is far better to think of it as a knowledge tool with channels you can subscribe to, allowing you to get access to the data you want, in the way you want it.

Every day at 9.45, we have a 15-20 minute standup call for our dev team. If people can’t make it, or have an urgent update, they post it to our #standup Slack channel. And quite often, people look at my diary and put in a meeting at 10am, even though I have a 30-minute placeholder in case the standup runs over.

So that means, some days I miss crucial information that the team is imparting because I have to log on to another call.

No more, thanks to Curious Colin

Did you know that your Slack channel can have an email address? The instructions are simple and available here.

Colin is the host of our standup Zoom meetings. So what did he do? He set up a simple rule in his email client so that every time an email arrives from Myna with a Standup SmartTranscript attached, he forwards it to our #standup Slack channel.

Magic! Which meant that yesterday, as is so often the case, I got to be in two meetings at 10am, and I am fully up-to-date with both, without needing an extra set of ears. 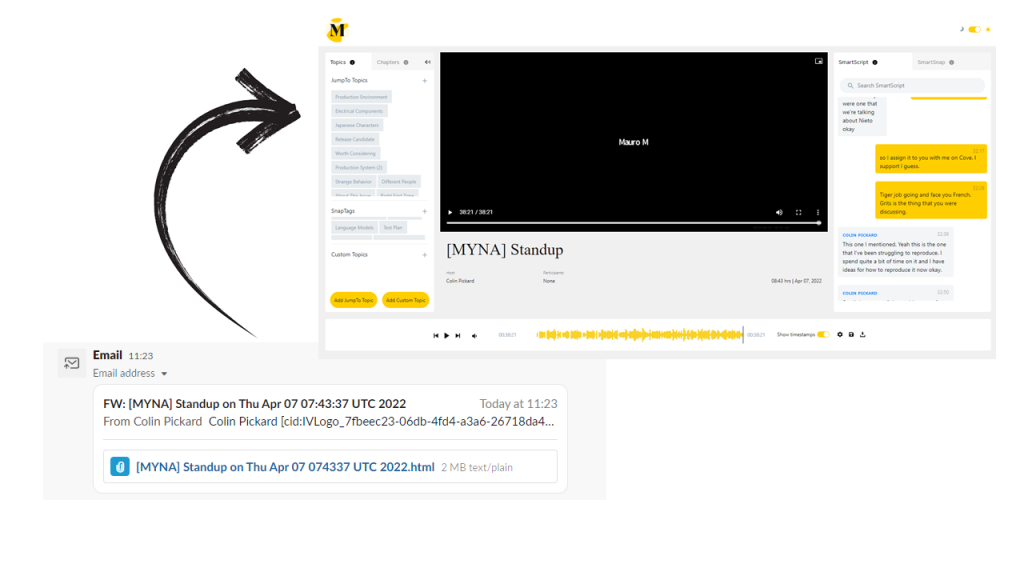 Zoom Fatigue is Real – Here’s How Myna Can Help.